Posted on September 4, 2013 by jamienoyd

Each time I trek to England I’m amazed by the number of religious ruins across the country, from Stonehenge to Fountains Abbey.  I’m particularly struck by the abbeys.  They retain the basic structures of cathedrals, but with a few items missing – like ceilings and walls.  Walking on the grass that now serves as the floors for these immense, decaying structures, I imagine them at various times in history: filled with religious men and women in prayer and work; closed and stripped of valuables by a king’s edict; used as inspiration for the musings of Romantic poets; and now visited by many believers on pilgrimage.

On my latest journey I again found myself standing in the middle of one of these structures – the Priory on the Holy Island of Lindisfarne in the northeast.  As usual I entered this space with a certain solemnity in my walk and gaze.  Shortly afterwards I read a small pamphlet Jane Austen penned in 1791, “The History of England by a partial, prejudiced & ignorant Historian” in which she comments on ruins like these, and their reason for being.

The Crimes & Cruelties of this Prince [Henry the 8th], were too numerous to be mentioned & nothing can be said in his Vindication, but that his abolishing Religious houses & leaving them to the ruinous depredations of Time has been of infinite use to the Landscape of England in general, which probably was a principal motive for his doing it, since otherwise why should a Man who was of no Religion himself be at so much trouble to abolish one which had for Ages been established in the Kingdom?

With a jab of humor she intimates that the then growing appreciation for these structures as ruins had eclipsed the painful history behind them.  Continuing to reflect along these lines, I wondered if these sites are visited more in their ruined state than they would be if they had continued as places of worship and ministry.  Eventually some of them would have ‘naturally’ been left empty as religious orders decreased and congregations shrank. Instead of being ‘martyred’ for the fancies of a king, they would have been closed and forgotten.  Without a story to tell, I would imagine that future generations would easily bypass them. Just another casualty of an ever changing society.

Nevertheless these ruins are truly a part of the English landscape now, as Austen observes. Maybe for some visitors a significant piece of history is merely another well-placed tree.  However, for many people the scaffolding of stones that remains allows them to infuse these places with meaning. 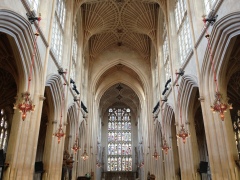 Before heading to Lindisfarne I spent time in Bath where I walked around and worshiped in Bath Abbey.  Since 757 AD a Christian church has stood at this site.  As with the dissolution of other monasteries it was closed down and stripped of all valuables in 1539.   Yet, unlike some of the other abbeys, the Anglican Church eventually rebuilt it when in 1572 the son of Matthew Colthurst, who then owned the shell of the abbey, presented it the the citizens of Bath to use as a parish church. Since then it has undergone several significant renovations and is now a place of history, art, and a living congregation. The soaring stone vaulting above my head, the stained glass, and the art throughout helped direct the worship beyond my small self.  I was rising up with the words spoken and sung for Evensong.  However, the experience connecting with the holiness of God seemed to be contained within the space.  Walking outside into the mass of tourists in front of the Roman Baths I was quickly brought back into my own frantic world. 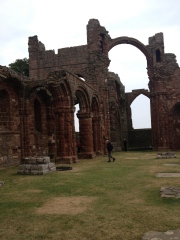 Two days later at Lindisfarne Priory, where the walls are slowly crumbling and any soaring ceiling is long gone, I experienced a more organic interaction with the sacred and secular.  As I and others walked around the land we saw the sky through openings where stained-glass once shared stories from the Bible; passed partial staircases that used to continue up to the second floor and a sleeping area; and touched crumbling walls that used to divide the spaces that separated monks and villagers. Here I recognized even more than at Bath the limits of humans on this earth in the erosion of this building.  I saw the grandeur of God as my sight didn’t have a ceiling to limit the gaze upward.  Unlike the abbey in Bath, there was no enclosed space that I entered or left.  Instead there was a constant conversation between the building, the land, and the visitors. I found that in this space my internal reflections did not so quickly leave, as I continued to reflect on God’s majesty and humankind’s humility of which this place is evidence.

I, like Austen, would caution people to see these sites as more than pleasant landscapes to observe from a distance of time and space. Through their layers of story they provide means for people to stop; to recognize our own limits on this earth; perhaps to sense a different presence of God; and then to return to the temples of today with a more humble heart.