Questioning My Response to the Mission

So what do you do when the trip that everyone said was going to change your life, make you a different person, doesn’t?  When people said that going on a mission trip to Haiti would forever change me, I would tacitly agree.  Still I wondered.  Would this trip really make me see the world in a new way?  Draw me into a life of mission work?  I know several friends who can pinpoint a change in their faith journey to a mission trip.  Compassion for the children and adults they encountered filled them and they changed their career plans.  However, similar experiences in my life did not follow that pattern.  Still, I held out hope this time.

As we drove over the mountains to Jacmel, about two hours south of Port-au-Prince,  I  pictured myself serving with this team and being transformed.  On the other side of these mountains a whole new life awaited. Trucks and motorbikes filled the roadways of Jacmel, while people carrying everything from tools to turkeys were sidestepping piles of garbage on the sidewalks.  We arrived at the Isaiah 61 Guest House and were soon out of the noise and dust of the main streets.  This former hotel with its large bedrooms and spaces to relax made me wonder if I had happened into a retreat instead of a mission.  I was happy to have this unexpected comfort, but wondered if this gated and guarded house would keep me safely out of the chaos of city life and from any significant change. 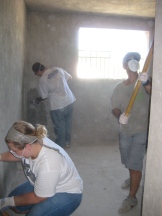 After an evening of rest at Isaiah 61, we headed out into the city.  First we went to the new guest house under construction at the Lutheran Village.  We spent several hours scraping its newly cemented walls to prepare for painting later in the week.  In the midst of the noise and dust of the metal shovels scraping against rough concrete, there wasn’t much connection with people outside of our team.  After lunch we gathered with members of our partner church in Haiti to hand out clothes and food in a tent city.  Our organized plans were quickly thwarted as people mobbed us.  In this chaos, I focused on keeping the group safe and getting through the narrow corridors of tents.  Every once and a while I looked at the people around me.  How had they come to this situation?  Would I act any differently?  But, for the most part I was analyzing the situation, distancing myself.  At the end of the day, that promised change had not yet come.

I was hopeful that this ‘change’ would start entering my life the next day during vacation Bible school.  Over 200 kids came and I told the story of the prophet Jeremiah’s call from God with the help of an interpreter.  Again, I was so focused on the task before me that I didn’t really connect with individuals.  Were the kids getting anything out of the story?  Other team members returned with stories of children hugging them and wanting to play.  I returned with a remembrance of questioning and sometimes blank faces.  The week continued like this – sporadic connections with kids and adults in the community.  There was always a distance – we were ‘blancs’  (white outsiders) – with all the baggage that brings.  I continued to want to unpack this with the team, but didn’t want to stifle the connections they were making with Haitians.  So, I kept these thoughts to myself, along with my growing disappointment. 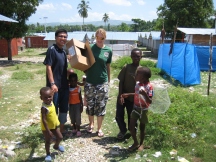 I especially felt this disconnect between myself, the Haitians we met, and even the other team members when we were handing out Bibles in a newly occupied UNICEF village.  Though people welcomed us each house, I didn’t feel it was always with open arms.  I got to the point I felt we were just sharing a spiel.  Were these people so welcoming because we were ‘powerful’ Americans with something to give them?  In such a desolate place who wouldn’t invite someone in just to enliven the day?  We could only trust that God would work through our awkward, one-time interactions.  However, based on comments from the rest of the team, they saw people open to hearing God’s Word and having others pray for them. This was life changing.  In the midst of their excitement, I was more cynical than ever and seemingly further from change than before.

I had truly wanted to be transformed in this mission – more drawn to share the gospel, to go on service projects, to reach out in care to others.  But, no.  That aha moment never materialized.  At least I never found myself saying with the other team members that my life would be different from this moment forward.  The common line that seeing the hope the Haitians exhibited in the midst of poverty didn’t seem real to me.  I didn’t know the lives of the people we met well enough to assume anything about them or how my being there had effected them.

Yet, maybe I was looking for the wrong change. The wrong place of transformation.  Instead of the people, the land had made an impression on me.  Throughout the week we took time out for rest and to get a fuller flavor of Jacmel by visiting small art galleries, going to beaches, riding in the back of a pickup, hiking to a waterfall, and eating a meal outside of the pastor’s home. In these times I saw the richness of this country that I eventually also saw in the people.  I was drawn to opportunities to be in new places and walk in new paths. 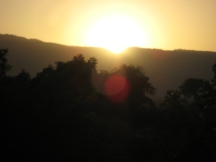 Also during these times team members let down their guards and shared how they were changing.  Our leader saw her vision come to life as she looked out of the guest house and saw a group serving with vacation Bible school, another group giving away eye glasses, and an English class happening in the church.  One of the team members was thrilled to be working with a local artist to paint a cross in the altar area of the new church.  These moments instilled in me a greater desire to do the same at home – to draw people together for meals, to provide opportunities for new experiences, and to take time to rest and explore.  In these moments I felt free.  This was an affirmation of what I had been doing and wanting to do through the practice of pilgrimage.  Yet, this small cry of ‘yes’ within me was its own form of transformation.

In the end I knew I wouldn’t be able to tell the change stories others and I had expected.  But that’s okay.  These moments in place, especially the morning rooftop views of the sunrise over the mountains, were openings to different stories that would continue to unfold at home.

So I read the stories, got the vaccines, packed the bags, and headed to Haiti.  I knew that the team was planning to work on a guest house, help with vacation Bible school, and pass out Bibles.  Still, I remained unsure about the trip.  What story was I heading towards?

Our travel plans had us changing planes in Miami – the following morning.  So 17 hours after leaving Kentucky we were still in the United States.  A lull before the storm.  This was time for the team to finally meet one another.  I wanted to share the stories I had read and see what others thought.  However, everyone else was talking about their excitement to serve – they were on board with the story of heading on a mission trip.  There weren’t a lot of questions.  At this point, it didn’t seem the place to redirect the team’s attention.  I was the one on the outside of this story.  So, I sat back and watched.

The flight into Haiti was uneventful.  Then we landed and saw the destruction that still hadn’t been repaired following the earthquake.  Here was the place where planes had been backed up after the earthquake.  We were familiar with these stories.  Navigating into the chaos of the airport and to our waiting van was like being thrown into the deep end of the swimming pool and frantically swimming to stay afloat.  Surrounded by people crowding in on us, we had to stay with the team.  Eventually we were outside.  The caribbean sun beat down as we waited for the van and people to load our 18+ bags.  While waiting I watched – UN troops, airport ‘employees’ looking for work, people waiting for family, vehicles parked randomly in the lot, chaotic driving patterns, dust.  How would I keep all this in my head?  What does it mean?  What’s the story here?

Driving to Jacmel provided another time to listen for the story.  First we encountered crawling traffic through Port-au-Prince.  All arteries were backed up.  We just had to wait.  The narrow roads were full of cars, taptaps (buses), and motor bikes.  Some of the roads were well-paved, others had gullies that could serve as pools.  People were everywhere – walking, selling, living.  Seas of tents filled every large, open space.  Crumbling buildings, including the National Palace, were the backdrop to this scene.  The cathedral looked like a ruined abbey; however, instead of being demolished by the edict of a king, an earthquake took this one.  Booksellers were amidst vendors of all other products along the sidewalks.  The inertia was apparent.

Slowly we made the way out and started up the mountains.  Roads were before us – narrow and winding, but free of traffic.  With our windows now open, I continued to watch out the window seeing the beautiful, though deforested mountainsides.  Several times team members made comments about how resourceful people the people were who created the terraced farming.  Maybe, but there is a larger story beyond what we saw.  Wouldn’t it be better to have retained most of the forests to help prevent erosion and land slides?

Throughout this drive questions kept coming to mind as I watched the scenery pass by and tried to take pictures of the valleys below.  I yearned to capture the stories behind the views but knew that I would always miss.  Miss the photo as the van drove faster than my fingers and eyes could connect with the camera, but, more importantly, miss truly connecting with the lives of the people we passed.